Stop the Blame in Your Life When You Own Your Feelings 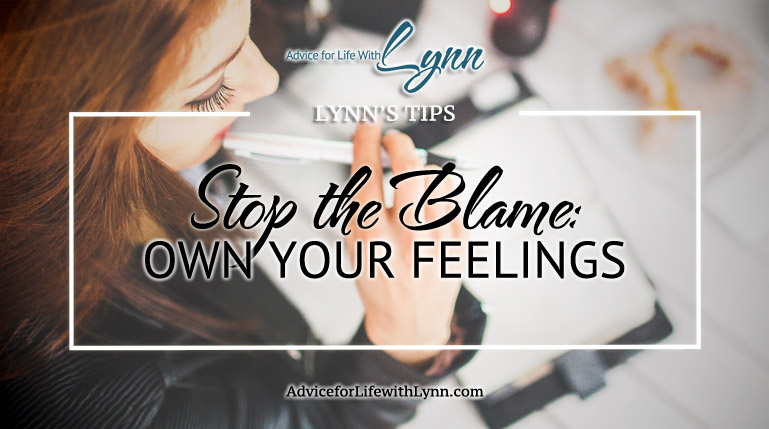 The first time I heard about owning anything other than owning stuff like a house or a leather jacket, I was in my second session of what would be many, many years with my therapist. I remember, for some reason, we were sitting across from each other in her daughter’s bedroom in red beanbags and I was complaining about my soon-to-be ex husband… telling her how abusive he was, and how I called him an lazy jerk and an a-hole.

She said to me, “I can understand how difficult that must have been. And then you called him names. You reacted and attacked him.”

I’ll never forget her reply, “So, own that.” I certainly wasn’t expecting her to say that. I didn’t even know what she meant!

“Okay, I own it…” I said the words but I didn’t know what l I was saying or what it meant.

Many years later (I’m a slow learner) and with much practice, I have come to a very, very clear understanding of what ownership means. It starts with being aware of your feelings, and ownership simply means that you own your feelings. It does not mean you have to condone or agree with what the other person is saying or doing, it really has nothing to do with the other person. It just means you are taking ownership of your feelings and your actions. Simple, yes. Challenging, definitely.

Why Would Anyone Want To Do This?

Because it’s good for you.

When you own your feelings you are absolutely, unequivocally, without a doubt not blaming anyone on this earth dead or alive for your crap. You are having a feeling, negative or positive, and you are taking ownership of it.

Let’s go back to that situation I was describing to my therapist about my ex-husband. If I were to own my feelings while my ex-husband was verbally abusing me, I would have said “I’m feeling verbally abused and I would like to feel peaceful and safe.”

Once I own my feelings, two beautiful things happen:
1) I’m not engaging in his insanity and getting nasty in the mud with him, so my chances of staying peaceful and maybe even getting happy are much higher.
2) Once I take ownership of my feelings I get centered much more quickly and then can choose what action I want to take. I would not, on the other hand, be reacting to him. Instead, I would stay conscious and be able to direct my own sail in the direction I want to feel.

How Can You Own Your Feelings Today?

A friend of mine recently got invited to a posh event on a Friday night. She’s a mom of three kids and has a pretty demanding job (other than being a mother and wife). She called me on the phone to complain about this invitation. “Ugh, can you believe they invited me to this thing?! It’s on the beach and everyone’s probably gonna be all fabulous and I cannot stand some of those snobby people. They probably just invited me because they felt they had to. Or they want something from me!”

My friend is pretty self-aware, so after a little bit of time she realized she wasn’t owning any of her feelings that were coming up for her from this invitation and said, “You know what? The truth is, it’s really nice I got this invitation… I’m just feeling really overwhelmed and I don’t even have the energy to go. But I’m also worried everyone’s going to judge me for not being there… I wish I didn’t care what other people thought.”

PERFECTION!!!!!!! She owned every feeling she possibly could in that moment. She said she felt overwhelmed, insecure and judged. Notice she did not at all use the words, they, you, she or he. She used the words, “I feel” and “I”.

Beware of Your Ego Getting Involved

But a little warning: the ego is extremely clever. The ego does NOT want us to own anything fully. But, if you’re reading this, it’s probably because your higher self wants to grow. So, the ego may be very slick with you. Your ego may be tempted to SAY the words, “I own that I’m angry she didn’t invite me to her party… but you know, she is so snobby. Who wants to go anyway?”

The first sentence was an example of you owning your feelings of anger. That’s your higher self talking. But the second sentence was your ego going to judgement. When you find yourself going there, ask yourself, “What am I feeling? What feelings can I own here?”

I challenge all of us, but right now you, to count how many times you can own your feelings in one day. I’ve got so many I’ll need a calculator…

By the way, my friend did not end of going to that party. She said once she realized how she was really feeling, she choose to own her jammies.