Failing is a Good Thing 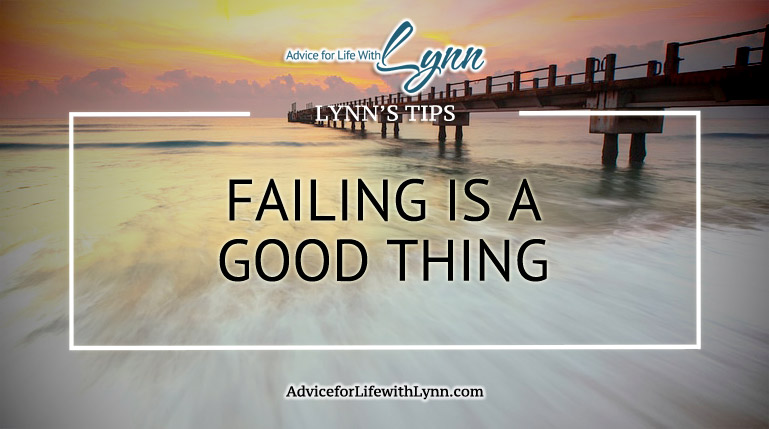 To a lot of people, failure is the inability to live up to one’s picture or expectations. I get that. When I took the ACT college exam and didn’t get into nursing school… they told me I failed the exam. And certainly I felt like a failure. When my first marriage was falling apart and I walked into the courthouse alone with my paperwork to hear the final declaration of my divorce I certainly felt like a failure.

So then what is failure?

It took me a while to realize that failure is actually something made up in the mind. Failure is in the mind. The mind is also referred to as ‘ego’.

Everyone has two parts of themselves: ego and spirit. But I’m here to tell you some really big news: failure is a facade!! It’s not real. It’s the mind saying: “This happened therefore, you are a failure.” The spirit says, “Everything happens as it should.”

“The Course” teaches us that if we want to feel good we should make up a good story. When I first heard this theory of “making up” a story, I thought it meant I should make up something that’s not true.

It’s About Our Stories

It’s kind of like when my son was little and he’d play with his dinosaurs with this elaborate set-up on the floor of plastic palm trees, fake boulders and colored dinosaurs of different sizes. He’d make some pretty elaborate stories of fight scenes between the little dinos and the big dinos, complete with spitting dialogue and grunting sounds of the “attacks”. He was making up a good story, a story that brought him joy.

He could have made up a bad story like “These are just pieces of plastic just sitting there.” — but that wouldn’t have served him because it wouldn’t have been any fun. So, was my son’s dino attack story not true? Was T-Rex in the fight of his life running away from a little orange dinosaur with a pokey back? It was true to my son and it made him feel good.

Let’s go back to my ACT scores. They said I “failed the test” therefore I wasn’t accepted into nursing school. At the moment, I felt like everything about me was a failure; my brain, my person, my essence. The story I told myself was: “You failed the test and you failed to get into nursing school, therefore you are dumb, not good enough and just an overall heap of failure.”

I took that bad story to community college and chose to do my best to ignore it, and started telling myself a different story. It went like this: “You can do this. You’re dumb, but if you work hard I bet you can get good grades.”

When I started getting A’s for the first time in my life my story got even better. I started to say, “You’re not dumb, you’re not a failure, you’re actually smart!” I went on to transfer to a private college and graduated with a bachelor’s and master’s degree in communications in four and a half years.

It was when I graduated I told myself a different story. I realized I actually never failed at anything. I received a low score on the ACT, yes, and I wasn’t accepted into nursing school, yes, and that was because I was meant to go on a journey of learning to grow my self-esteem by working hard and subsequently believing in myself.

It’s the same with relationships. As a life coach, I’ve seen quite a few women who are going through divorce or a break up and feel like a failure — they feel they’ve wasted so much time, or feel ashamed their relationship is ending. They tell themselves negative stories about how they’re a failure, how they’ll never find anyone and can’t trust anyone again. They tell themselves the story that success is being married or being in a relationship. Failure is divorce or being alone. All of these are negative or bad stories.

When I was going through my divorce years ago I had a whiff of failure. I told myself a few negative stories like, “Oh my God you’re the first person in your family to get a divorce! What is everyone going to think of you? You’re a stain to the family!” But, through the grace of God I didn’t stay in that story long.

I believed then and I believe now, my first marriage of 8 years to my teenage sweetheart was not a mistake. Even though it ended in me fearing for my life — I did not fail.

Because in those 8 years I grew as a person. I became more self-aware and by leaving a toxic relationship that was absolutely no longer working, I was learning how to take care of myself. I had and have no ill will toward my first husband (even though he can’t stand me) and do not view getting married at the tender age of 21 a mistake. It happened, I’m glad it happened, it was the right decision in the moment and it made me part of who I am today. That’s a positive story.

That is not failure.

I always go back to the Olympics. When you watch the ice skaters with 2 minutes to show the world they are worthy of a gold medal and you see one of them fall — that’s THE MOMENT. That’s the moment we all have in life; when we fall we have a choice to tell a good story or bad story. The skater can tell herself/himself a bad story; “I can’t believe I fell! All the sacrifice, all the hard work, my whole life depends on this!” and he or she would probably not finish a good routine. Or, the skater can tell herself/himself a good story; “Shake it off, stay in the moment, I know what I’m doing.”

How do we change our view on failure?

When we are aware we are telling ourself a negative story of failure, we are ready to choose a different story.

Some people may say it’s being positive. I say it’s learning from your actions and choices. When you learn something about yourself— it’s never a failure. It’s a success.

Life isn’t about not falling.

It’s about how you get up.

And learning to tell a good story.

Your Life is Real. Social Media is Not.

Have Faith — Then Have What You Want