Recognizing the Power of the Second Agreement 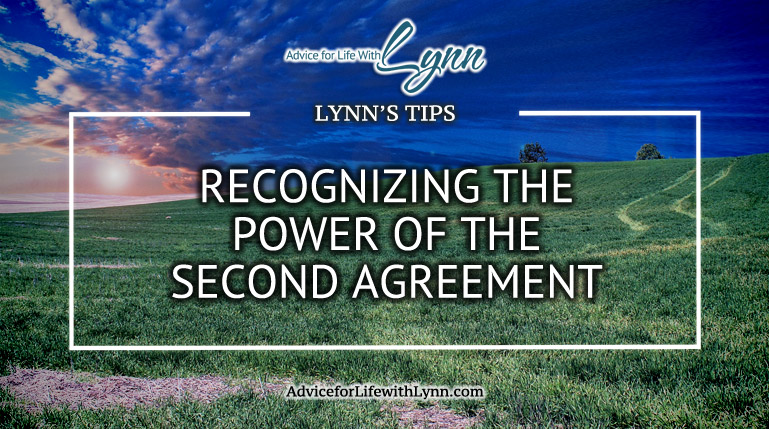 It’s the second agreement in the famous book “The Four Agreements” by Don Miguel Ruiz.

I love this book and I love the message behind the second agreement; always stay centered, know who you really are, and accept and know other’s perceptions are only about them.

Wonderful words to live by, a challenge for many of us.

What exactly does that mean?

I think we do it by practice.

As a personality on television, I get a lot of practice.

As a mother and wife, I get a lot of practice.

As a human, I get a lot of practice!

But, sometimes I fail….

Recently, I got an email from a viewer that went like this (misspellings included):
“Ur hair looks horible today did you even wash it ? You look terrible.”

I haven’t reached a state of enlightenment, so naturally my first reaction was a feeling of being punched in the stomach.

My old cellular memory fired off immediately in my brain that said, “See Lynn, you’re not good enough.” That old thought led to the old feeling of not feeling good enough which led to familiar feeling of being punched in the stomach.

But this time, I caught the feeling almost right away. I was aware I felt really bad; I checked my body and noticed I was even slumped in my chair.

I put the second agreement to work.

The Second Agreement, Step One:

I reminded myself the feeling I was having of not being good enough, is my feeling. It’s an ancient story and wound that turned into a button, and this viewer is just pushing that button.

I told myself, “You are good enough. Remember all the beautiful emails you get from people who value you, but don’t depend on them to value yourself. Know yourself and know your own value and worth.” Once I did that, I put my attention on the viewer.

According to the second agreement, this viewer’s comments were not really about me, but really about her. I wondered if she was having a bad day, or if she didn’t like how she looked (which I could related to). I accepted her projection for what it was – a projection – but didn’t agree with her.

Accepting what is, does not mean you have to agree with the person (we’ve talked about acceptance before). Not taking anything personally is almost like having an invisible force field around you that protects you from absorbing and ingesting other’s projections — positive or negative.

Once I was sure I wasn’t taking on this woman’s words, I could fully accept this was really all about her. Her feelings were about her. Just like my feelings are about me.

I decided to respond to her with love. I didn’t have to respond, I honestly just wanted to practice and see if I could do it.

I wrote back: “Thank you for watching and I hope you have an amazing week. Sending you much love, Lynn.” And I meant it. I hit send.

The next day the same viewer sent another email:
“Ur hair looks much nicer today good job.”

Again, I practiced not taking the words personally. I decided not to respond because I didn’t need it — I already passed the test! The viewer emailed me yet again on another day with a hair report, and again I didn’t feel the need to respond.

Not taking things personally means being self aware

Not taking things personally means being self aware — know your feelings are your feelings and other people’s feelings, opinions and judgements are theirs, even when they put your name on it. I think it also means accept compliments with grace, but don’t allow them to penetrate your force field. Just like you wouldn’t allow negative judgments about you to penetrate your force field.

So, the next time someone flips you off on the highway — practice not taking it personally, and know that poor driver has some anger going on — and keep your force field strong.